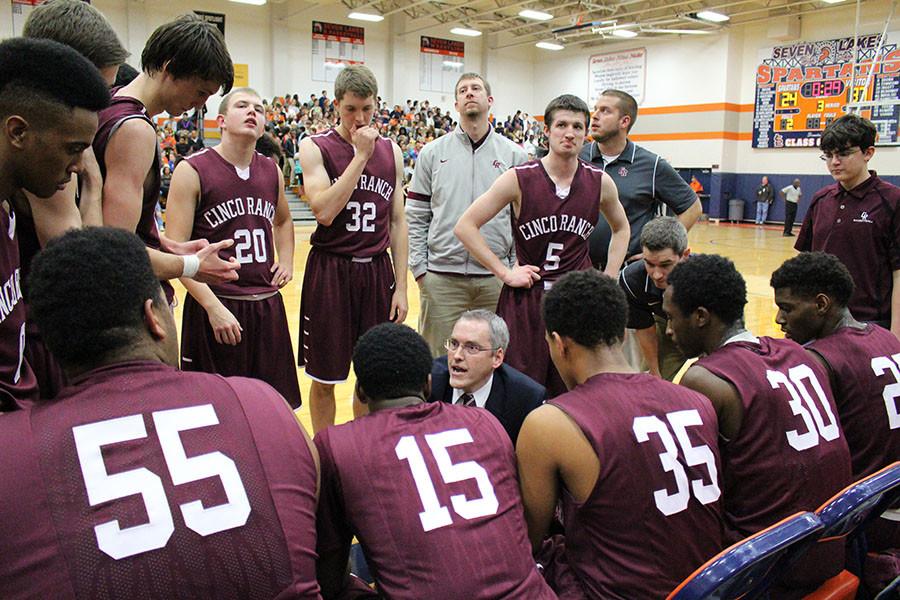 “We strive ourselves in our program to play hard, play smart, play together but to have fun because the players on our team are playing a game that they love,” Coach King said.

It’s not just what varsity basketball coach Neil King says before each game. It is how the team makes each play. It is how they claimed the district championship with a record breaking winning streak. Together, they found a way.

“It’s hard work; It’s dedication; It’s talent,” senior center Isaiah Edwards said. “There are teams that have maybe one or two of those, but when you can combine all three into one squad, which is what we have done, you have the perfect formula for success. Not only do we have five good starters, but we have eight good players coming off the bench too. We are always fresh. We always have somebody who is in and ready to fight for that victory.”

Winning the Conoco-Phillips Katy ISD Tournament in early December gave the team momentum to carry on a string of wins. According to Edwards and senior co-captain Marcus Jones, after the tournament, they knew they had the ability and potential to have a season like never before.

“[The winning streak] felt unreal at first and then after a couple games we felt like ‘Hey, we could actually make a record and make this season special,’” Jones said. “It just hit us. We kept our wins up and kept pulling games together. When district plays started we knew we could dominate our district.”

The team’s game plan consisted of taking one game at a time and giving each opposing team their best performance.

“The basketball season is not a sprint,” King said. “It’s a marathon. It’s a long season. Every game in district is important and for us to be able to reach our goals, we can’t overlook anybody. We just have to take them one by one and put forth our best effort every time we walk on the floor.”

Junior co-captain JR Adams believes that the difference between this year’s team and previous years’ is their competitive nature not only during games but during daily practices.

“They have that ‘refuse-to-lose’ attitude and they just battle,” King said. “They’ve got a genuine attitude for competing. I really admire this team for never giving up and battling for the whole game and this whole season.”

Yet King states that beyond the sweat of countless drills, endless hours of watching film and writing up scouting reports, he emphasizes for the team to keep alive their passion for the sport.

“We strive to play hard, play smart, play together, but also to have fun,” King said. “The players on our team are playing a game that they love and are passionate about. I don’t ever want to take that away from them. I never want them to forget to have fun and they have done that. They have done it really well.”

Being friends on and off the court, the players can hold each other accountable while having fun.

“I love those guys,” Edwards said. “They are all excited, they all love playing, they all have fun and they love being around each other. It’s just like a big thirteen-man family. Well, more like seventeen, if you add the coaches and our manager, because we love them too.”

The players also attribute their success to their coaches, who do not just lead: they keep the team composed, on edge and ready to compete.

Beyond encouraging the boys to find a way to make an extra pass on the court or pull off another win, King strives to instill in the players life lessons of hard work, dedication, commitment, sacrifice and overcoming adversity in order to help them find a way to be successful in life.

“Yes, we want to be successful on the court and that’s a big part of it, but really we are trying to help these young men develop the life skills that they need to be successful after athletics and after high school,” King said.

The season ended in the second round of playoffs against Benjamin Davis HS with a score of 65-61. According to senior co-captain Sedric Bostic, the team found a way to do more than accomplish a 24-game winning streak and a district championship, they found a way to grow together.

“It’s one of those things you are going to remember the rest of your life,” Bostic said. “We learned how to face adversity and how to not give up. We were able to learn from our mistakes and grow out of them to the best of our ability and we realized how to get positive results as a team rather than just individuals.”