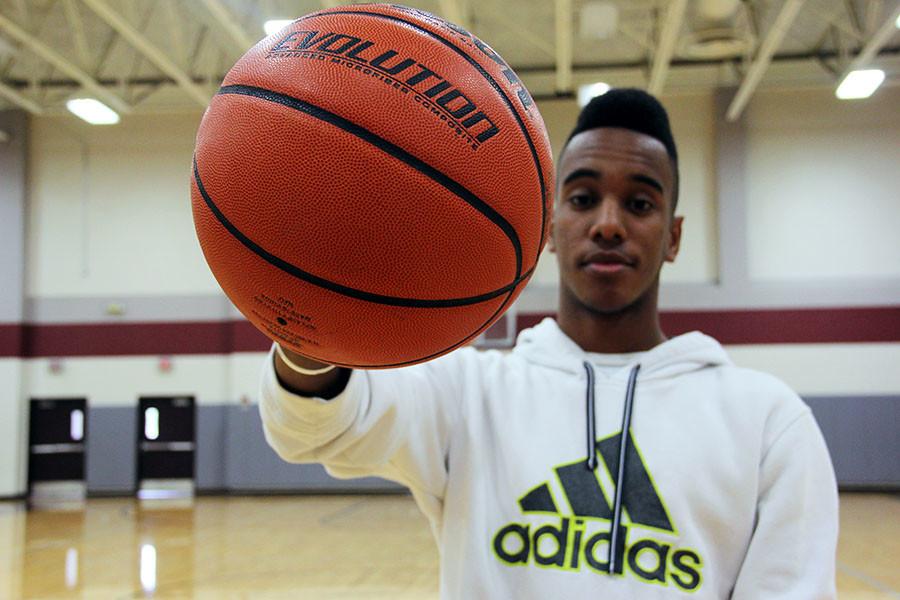 The Art of Being You: Sedric Bostic

With four younger siblings at home and twelve brothers on the court, senior captain and point guard Sedric Bostic knows more than a bit about teamwork and leadership.

Bostic found his passion for basketball at eight years old after sampling soccer, baseball and football. Since a young age, he has cultivated the mindset of team player and leader.

“I found out that basketball was my true love and I just love doing it, I love watching it and I love learning about it,” Bostic said. “My favorite position is point guard because they control the ball so much. They are the coaches on the court, they are the leaders, they do what needs to be done when asked. They are the foundation of the team.”

After tryout results came out junior year, Bostic saw his name on the Junior Varsity board and he knew he had made it. In basketball, making JV is the biggest hurdle; from there, it’s smooth sailing to a spot on the varsity team senior year.

“It really brought a feeling of accomplishment and joy because so many summers and off seasons of hard work paid off,” Bostic said. “The road wasn’t terribly easy, but at the same time, it wasn’t terribly difficult.”

After moving back with his dad to Tennessee his first semester of sophomore year, Bostic was unsuccessful in making the basketball team there. Regardless, he didn’t stop working hard in order to improve. Bostic attributes his persistence to his stepdad, Brian McCray.

“I was unsuccessful at making the basketball team there,” Bostic said. “But I didn’t stop. I had to keep going.”

Despite initial feelings of pressure, Bostic reflects positively on his stepdad’s  influence.

“At the beginning I really thought it was hard criticism,” Bostic said.”It was putting me down because of how much he was getting onto me. But now as I look back, I realize that he was just pushing me to become the best I could be. No matter how authentic his motivation was, it made me the player I am today.”

Bostic moved back to Cinco Ranch second semester of sophomore year and the coaches gave him an opportunity to continue his basketball career. After moving up to varsity, Bostic was voted team captain. He was given this position by being attentive and available for his coaches and teammates when needed.

“I kind of just put myself out there,” Bostic said. “Coach needed something, I got it. My mindset was and is ‘do what needs to be done for the rest of my team.’”

As a team captain, Bostic takes on the responsibility to motivate his team mates and set goals.

“I just make sure all my teammates can do what they need to do. I try to put everybody in a situation where they can learn and do what is best for the team so that we can achieve our goals and even exceed them. It is the team before me.”

Bostic’s main strategy carries on off the court in order for him to achieve his personal future goals.

“[I want to] be in a position where ten years from now I am happy, and twenty years and thirty years from now I’m still happy. I want to be in the best situation to get the best opportunities and possible outcomes for me and my potential family.”

Bostic’s positivity and happiness takes the form of an iPod in his back pocket. He dances up the halls, headphones in, flashing smile on, jamming to a good beat. Besides basketball and his younger 7-year-old brother, all he needs is a upbeat song to transform any struggle into a positive situation.

“My strength is probably my ability to adapt to adversity,” Bostic said. “I try to make sure that I find a positive outcome from any negative situation. Even if something is really going tough for me, I put my headphones in and I start dancing because it makes me laugh and it makes me really enjoy the day, no matter what. A lot of negativity goes around but I try I make sure to find a good thing out of everything.”

Bostic’s main focus for his last semester of high school and for the future is to continue to enjoy the things that bring him happiness. One of these things is the close relationship he has with his seven year old brother, BJ Bostic.

“My brother, BJ, gives me motivation each and every day,” Bostic said. “He is going to have about nine years where his big brother is not going to be there all the time to see him grow and guide him. These next few years I will be working hard to make sure that he can still grow and learn the same way I did.”

Ultimately, according to Bostic, besides the pythagorean theorem, the greatest thing he has learned in high school is how to create his own happiness.

“As you are finding your role in the school, don’t dwell on it too much,” Bostic said. “No matter what situation you come out of. Just learn how to have happiness in everything that you do. That doesn’t mean you are going to be happy all the time because you aren’t going to be. That’s just life. Realize that you can do amazing things but you can’t accomplish these things by dwelling on the drama. Have your own happiness and be able to live your own life.”