1000 Miles and Counting: A Cross Country Journey to State 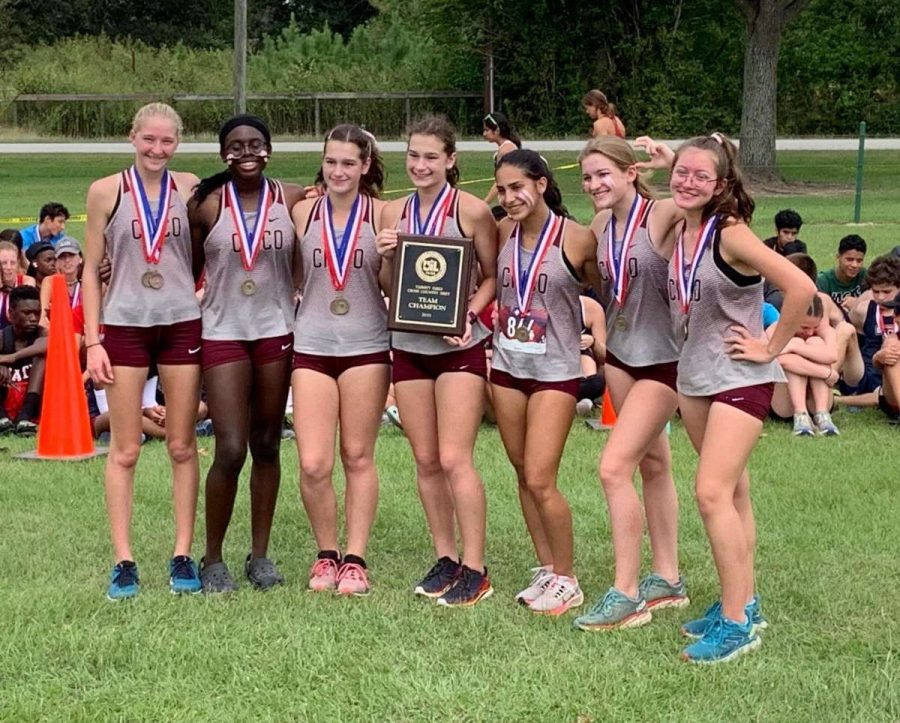 The Cinco Ranch High School girls varsity cross country team finished fourth in the UIL 6A Region 3 championship on Monday, October 25, successfully earning them a place in the UIL 6A State contest.

The runners representing the team trained relentlessly, beginning workouts and runs in the last week of May and practicing every morning since then.

“We start the summer off with lower mileage and we don’t do workouts quite as often,” senior Anika Mueller-Hickler said. “As we start getting later on into the summer, closer to the school year, we start increasing our mileage and changing our workouts a little bit.”

Heading into the regional competition, the team increased their training significantly.

“Our workouts have been a lot more intensive than they have been, because we’re focused on changing the mental gear,” Anika Mueller-Hickler said. “Mental [health] is just as important as physical.”

The runners, despite competing against each other at races, don’t let results get in the way of the strong team bond. There are eight athletes on the girls varsity cross country team, which Anika Mueller-Hickler describes as extremely tight-knit.

Alison Mueller-Hickler, originally a swimmer, was hesitant to run at first.

“The Beck track coach came up to me and told me ‘You should run.’ and I said ‘Yeah, no.’” Alison Mueller-Hickler said.

After coaches asked her to reconsider her decision, she reluctantly signed up for the track team.

“I thought ‘Oh it’ll help me for swimming’, and I just fell in love with it, and in eighth grade I quit swimming to run.”

As seniors this year, the twins have become role models for younger runners at Cinco.

“We want to be the best for our underclassmen.” Alison Mueller-Hickler said. “We feel a lot more pressure to perform well. There’s a lot more responsibility.”

Despite the pressures, not only as part of the sport, but also from school and their personal lives, the runners are very excited.

“We’re going to go out there and do our best race.” Alison Mueller-Hickler said. “I want to push myself as far as I can go and try to get some really good PRs (personal records), along with the rest of the team.”

The push to lead the team and set the pace has been especially great after the loss of two very strong runners, Sophie Atkinson and Heidi Nielson.

“This is our first year without them [Sophie and Heidi]. It’s changed the game a little bit, because we need to make up for the gap that’s there.” Alison Mueller-Hickler said.

Alison and Anika Mueller-Hickler have clearly filled the space left behind by graduating members of the team, finishing second and 10th at regionals, respectively.

“That’s the brilliance of our team, and the sport.” Alison Mueller-Hickler said. “You go out there and do great things when you know that you have the capability to do them. You just need to believe in yourself.”