After 16 years, still wrestling for attention 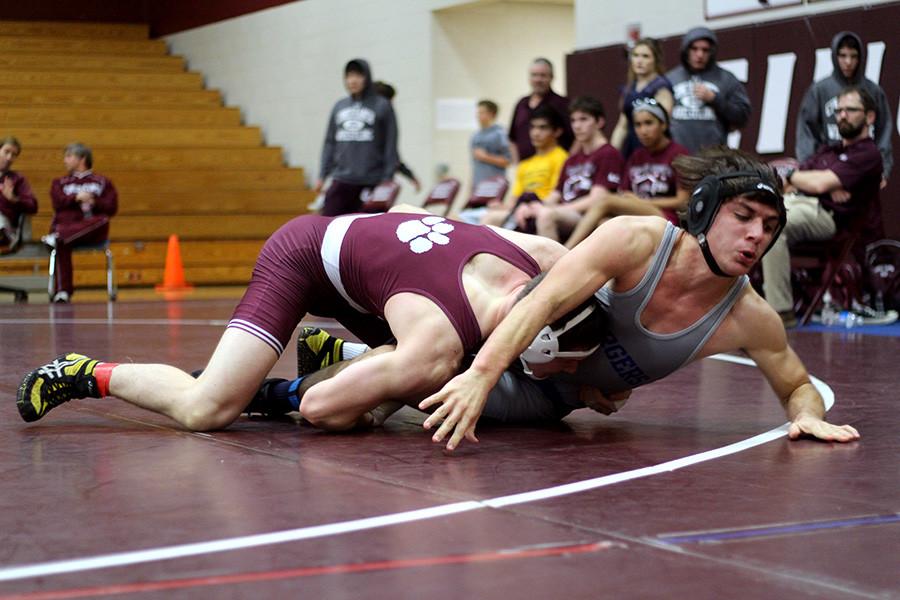 Junior Blake Williams tries to maneuver to expose his opponents back to the mat to gain points.

Despite the fact that the University Interscholastic League sanctioned the sport of wrestling in 1999, it has often been viewed as an under appreciated sport in this region of Texas.. Wrestling’s history dates back to ancient Greek and Roman civilizations; that is not something that can be easily brushed aside. Texans have never given much attention to the sport; instead many treat football with over-inflated passion since it’s so ingrained into the thought and the societal norms around these parts.

In recent years, the UIL football championships have been held in stadiums that hold up to 80,000 people, and are often filled or come very close to it. Wrestling has always been hosted at smaller gyms that usually hold around 2,000-3,000 people at most. Wrestling is an intense sport that not only teaches individual strength and development, but also develops team support among athletes of different physical stature. It is similar to cross country minus the shorts, the tank top, the hills and the greenery. Replaced instead by a foam mat, a well-lit gym, a referee thrown in there and the result is wrestling.

Despite holding its own place in the Olympics since ancient Greek times, wrestling is often cast away, overshadowed by more mainstream sports like American football. In all honesty, the flood of football coverage is disproportionate to the amount of more individual competition like wrestling. A lack of understanding about wrestling’s value contributes to the lack of fan base support.  At the last wrestling meet, the bleachers were only half full, but the competitors appreciated the small, but supportive crowd.

When approached and asked about wrestling, people tend to blurt any stereotypical phrase that criticizes the sport or they just blank out completely or say something along the lines of… “Why don’t they fight like real men and punch each other?”. Little do they know that wrestling is a game of tactics and concentration. Every move made by your opponent, from shifting the wrestler’s weight from one leg to the other or anything to gain the tactical advantage and score you points.

The scoring system is quite simple. Takedowns are worth 2 points, and pins win the match. With multiple ways to score points, the team with the most points wins. Pretty simple right? Sure the sport is distributed by weight classes and it seems complicated, but it is still relatively easy to understand. Every weight class has their own bracket, and their points are attributed to the team and the individual wrestlers.

Although many will admit that the regular season was not entirely fruitful, the grapplers fought with perseverance and both teams won district championships, the mid-weights reaped the most success with titles and advancing to the regional and the state levels. The state wrestling meet was held on February 20-21. The boys Wrestling team placed 6th place and the girls team finished out 10th. senior Ricky Regas finished out his fourth and final year as a Cinco grappler with four consecutive state championships.

So why not go to the first home meet next year? Go out and support a team worth supporting, one with multiple state championships tucked underneath their tough hides.