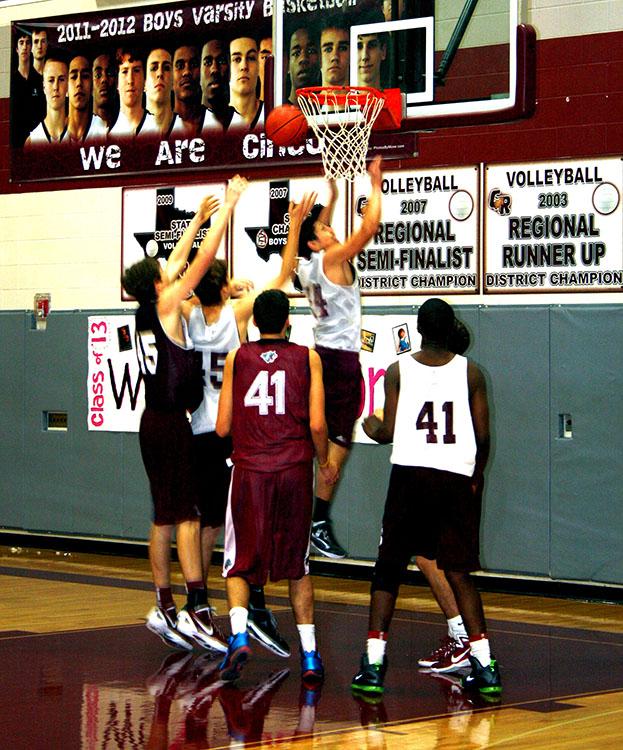 The sound of whistles, sneakers squeaking, and players sprinting back on defense echo throughout the gym during the boys varsity basketball practice. With a month until tryouts, the team is preparing for the upcoming season. Last year’s team not only had to deal with a difficult schedule, but also the tragic death of junior point guard Chris Saiz. The loss brought the team together but only three players will be returning from last year.

“We are going to score by committee, King said,”. “It might be one guy one night and another the next. We will just have to wait and see, but I think Malik will score and Omar can dominate in the post.”

During the off-season, coaches expect players to keep a workout routine and to play either summer ball or travel team. That way players come back in the fall semester well-conditioned.

“The group as a whole, I believe got better,” King said..The two guys who took tremendous strides are Ben and Omar. Both guys look like they came back with more skills,”. Senior Omar Eldiraoui, the team’s starting center has been working hard during the off-season to make sure he is ready when the season starts.

“I feel like I got a lot better,” Eldiraoui said. “I put in a lot of work with some people and worked out with Brandon Bush of Texas State.”

The varsity team will be made up of primarily juniors and seniors, with the exception of sophomore Malik Amos. Being the youngest player on varsity at the age of 15, Amos feels that although he is young, he can play with the best.

“I’m ready to get back to work and lead this team to district,” Amos said.

The starting point guard will be junior Ben Sonnefeld. After playing junior varsity as a sophomore, he will move on to varsity and look to control the offense and keep the ball moving.

“My role is to be a point guard, [whose job] is to distribute, pass and look to score second,” Sonnefeld said.

Varsity’s starting back court will include Ben Sonnefeld as the point guard and Malik Amos as the shooting guard. Sonnefeld and Amos are both comfortable with their positions.

“Me and Ben are probably going to change positions between shooting guard and point guard,” Amos said. I feel like this will be fun and we can use this to our advantage.”

Playing the power forward position is senior Connor Pruitt; as a returning player he wants to lead by example.

“As a senior and one of the few returners, I hope to be a leader on the team,” Pruitt said. Either way, I look to have a role that is benificial to my teammates.”According to Eldiraoui, the upcoming team will have capable shooters and speed but a lack of height.

“Right now we need to rebound better,” Edliraoui said. We’re not as big as the other teams, but we’re there athletically.”

Even though tryouts are in a month, the coaches have been evaluating the players, whether in open gym, scrimmages or the athletic period.

“We all have basketball knowledge and we all watch the players. There is a long evaluation player whether in open gym, or the athletic period,” King said.

Last year, west Houston schools had a lot of seniors on their respective teams such as Seven Lakes, Katy Taylor  and Strake Jesuit however  a lot of players graduated. The basketball coaching staff believes this could help out the team and their lack of experienced players.

“The district kind of turned over because every team in district graduated quite a few players,” King said. “But every Tuesday and Friday it’s going to be a battle.”