Team Gears Up for State Competition Next 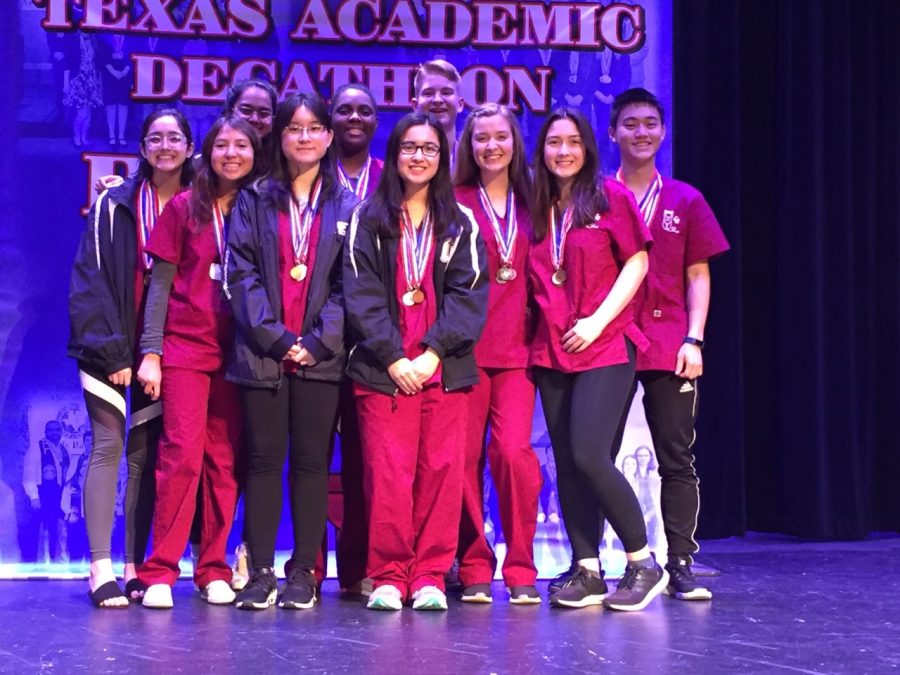 The Academic Decathlon team took third place at the Region VII Academic Decathlon meet, scoring a new school record of 44,900 points, as well as winning second place in the Super Quiz event. Many team members also won individual medals. This win qualifies them for the State meet from March 6 to 8.

The varsity division is comprised of junior Julie Rojas and seniors Ahriel Tyson and Camila Santos. Tyson scored second in the speech and art categories, and Santos scored first place in interview, second place in the essay category, and third place in the literature, art, and social sciences categories. In addition to being the highest scoring varsity member, Santos also took third place for the top overall decathlete.

“It really intimidates people when I describe all the categories, they think ‘oh, you must have to be really smart to get on the Acadec team,’” Chaudhry said. “It’s really not about how smart you are though, but how much you learn and study the material and practice the subjectives. I feel like I can control my own outcome in it because it’s all about how much I study.”

Acadec has ten categories, math, music, science, social science, literature, art, and economics, which make up the objective tests, and speech, essay, and interview, which make up the subjective tests. The objectives are all multiple choice tests with 50 questions, except for math, which has 35, and competitors have 30 minutes to complete each test. The subjectives all vary in time and are scored by a panel of judges.

“Speech is broken into two parts, prepared speech, which is a speech you work on beforehand that can be from three and a half to four minutes long, and impromptu speech, where you get a prompt and then you have one minute to prepare and one and a half minute to two minute speech,” Dong said. “With interview, they ask you typical job interview questions, minus the job specific ones. With all the subjectives, you have to really try to appeal to the judges’ senses, whether that’s through humor or sadness or general relatability.”

Each year has a specific theme that is revealed in the spring, after the national competition. Teams then have the summer and fall to order all the guides and begin studying. This year’s theme is health and sickness; for example, social science covers the history of healthcare, and music covers pieces about sickness and death.

“I’ve been in the class for three years, and the first two I didn’t really try as much,” Dong said. “The hardest part was finding the motivation and the perseverance to study and keeping restudying all the guides and material. It really is a self-motivated, self-induced success. You can’t control how smart you are or how quickly you grasp a concept in math class, but you can control the amount of time you put into Acadec.”