Senior reject Rice for University of Texas at Austin 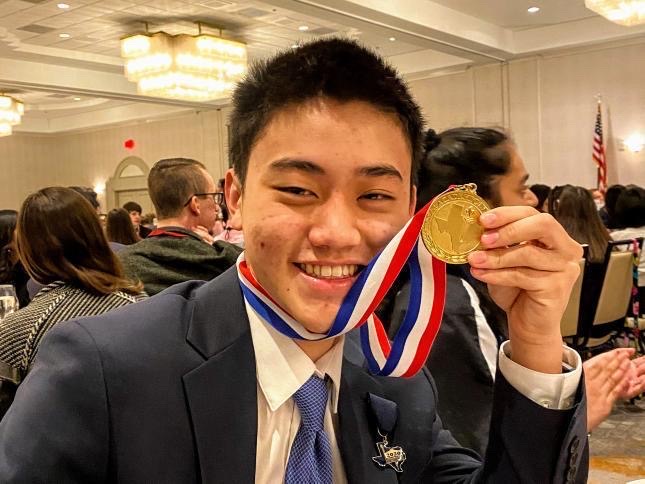 As the end of the school year begins to crawl closer and closer, the final moments of high school begin to dwindle for soon-to-be graduated seniors, one of which is Daniel Yang.

“Good is a relative term,” Yang said. “ have so many other things. I have academic decathlon, robotics, Boy Scouts and I have my GPA. For something to be worthwhile to put on my resume it needs to reach a certain level. I was good at oboe I think objectively speaking, I was above average. I have high standards for anything I do. But I realized band was never going to be one of those things that I could put enough time into or felt like putting enough time into.”

Yang was part of the band for three years. He played the oboe for the concert band and was part of the drumline for the marching band. Yang also made the region for freshman year region band.

“Managing time is like you kind of just have to make use of what small amounts you have at school,” Yang said. “I’ve finished just about all my homework at school so for four years of high school, I honestly don’t have that much homework that I do at home. Most of the time it’s done at school during class 2.5 and that frees up time at home. I’m unproductive at home. I don’t believe in scheduling down to the minute. I believe more in blocking and so that’s pretty much how I manage my time even with the busy schedule.”

Yang won the Katy ISD Student Award of Excellence for the at-large category yet this year. He was one out of five of the national merit scholarship winners. Yang is also ranked number five for the class of 2021.

“In terms of why I have high standards. I don’t know,” Yang said. “Probably started because my parents had high standards and I just kept them. Motivation is hard to come by this year but normally it’s just doing the best and being the best is what motivates me.”

“I got in for CS Honors in UT,”  Yang said. “Honors at CS only take 150 people a year. Only 50 people go each year, roughly. So it’s a very small group of people, the classes are really small. you develop close relations and it gives you a lot of opportunities especially to do research. So you could argue that it’s better than MIT and Stanford. It’s a really good program, so it’s really hard for me to turn it down. The only real one I was considering was Rice. But I think Rice, in the end, I think it just couldn’t beat Honors. It was too good of an offer to pass up.”

Yang received second place in social science at regionals for at State and first at regionals in Academic Decathlon this year.

“I love CS because I like problem-solving,” Yang said. “When I have a problem, I like coding and trying to think through it and develop the algorithm to try to solve and break the problem. That’s super enjoyable. And when I finally do it, it’s amazing, the best feeling in the world. And so that’s what I love about it.”

Yang received first place in speech for regionals in Academic Decathlon this year. He also received second place in math regionals and state.

“I had a lot of pressure to go somewhere good like getting into Ivy Leagues,” Yang said. “When people realize that I didn’t even bother applying to MIT, a lot of people are surprised. I think, having that burden and having that expectation on you, you have to have a certain level of maturity to realize that people’s thoughts are just others’ thoughts. Where you go in the very long run doesn’t matter a lot. I’ve heard of very, very few people who don’t like where they go to college. Everyone is upset when they don’t get into the colleges that they want to go to. But I’ve never heard of someone not liking where they end up going. You’re going to be fine, you’re going to have a great time, and you’re going to succeed in life.”