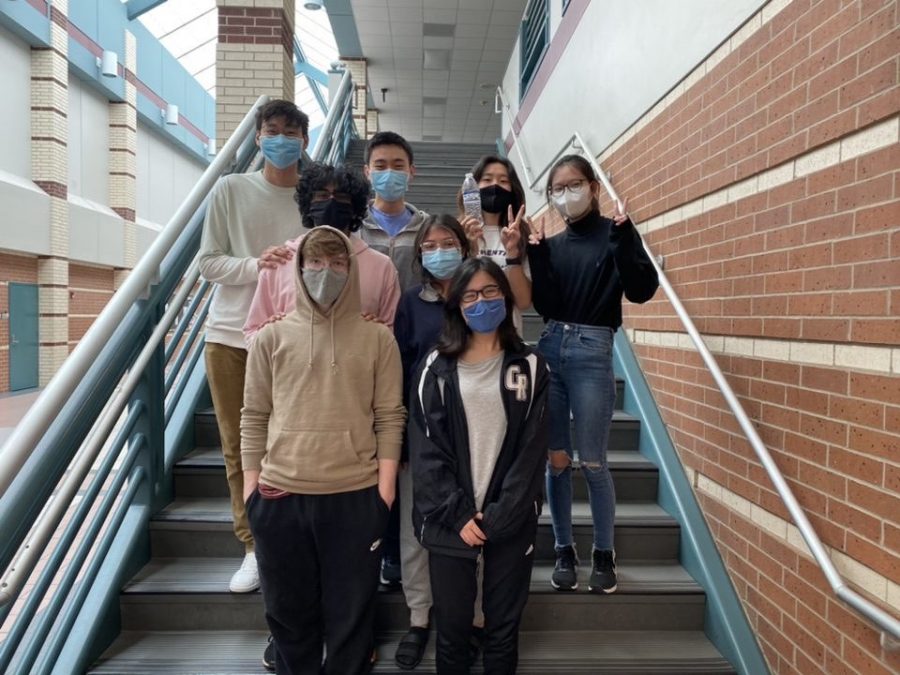 Nine students sit spread out in a computer lab. The air is tense, buzzing with nervous anticipation, as these AcaDec teammates prepare for their State competition. Some seek to clear their head and relax, while others frantically parse through their memories, trying to recall the material they have studied for months on end. Their proctor gives the all-clear, and with nine mouse clicks, everyone begins, jumping headfirst into their first test of seven for the day.

“It was definitely a very different experience, last year versus this year,” Daniel Yang, senior and Honors team member, said. “Last year, State snuck in right before everything shut down due to COVID; online testing in a computer lab with just nine people and a proctor is very different from paper-and-pencil testing with 200 students in a giant ballroom. I personally prefer in-person, but I think there were some benefits; we didn’t have to go all the way to San Antonio, and we got to spend more time as a team together. We hadn’t been able to do that as much this year.”

The Academic Decathlon team took home numerous awards across the board at this year’s Texas Academic Decathlon State Competition on February 27, ranking 25 overall out of 229 teams from across the state. AcaDec consists of 10 topics; seven objective tests for Art, Economics, Literature, Mathematics, Music, Science, and Social Science, and three subjective categories: Essay, Speech and Interview. The objective topics all have a common theme, revealed on March 1; this year’s was the Cold War. Music and Art both examined different pieces from America and the Soviet Union, Science covered concepts such as astronomy and the Space Race, and Economics analyzed concepts such as the economic disparities between East and West Berlin. Students then receive guides, large booklets containing the material to study for each topic, on May 15.

“I think just making it to state and doing as well as we did at State was pretty impressive,” team coach Ashley Miller said. “We only had three people on the team this year who were on it last year, so having essentially a new team and given all the other setbacks, making it as far as we did is something to be really proud of.”

“Finding the intrinsic motivation to study is probably one of the hardest things,” Yang said. “It’s seven different tests over the course of one day and nearly 700 pages of material to learn and memorize. It can be difficult to find that motivation and desire to study even when you could be playing games or sleeping or doing other school things. It’s a very exhausting and mind numbing activity, but when I do it with my teammates and friends it’s a lot of fun.”

Over the summer, Miller and fellow team coach Samiha Rahman set up reading calendars for students to help aid their studying, and the class had weekly meetings over Zoom. The class continues studying and practicing together throughout the fall, attending several scrimmages and invitational competitions, until they officially pick the nine team members at the end of the semester to compete in the Regionals competition and beyond.

“Just even making the team is pretty hard,” Asmit Chakraborty, junior and Honors team member, said. “The amount of studying you have to do is something I didn’t expect at all when I first joined the class sophomore year, but it has a good payoff.”

The Regionals competition in January serves as the qualifier for the State competition in late February. This year, teams faced the added stress of having to do all of their tests online, plagued by technology issues that spanned the entire state.

“Regionals ended up crashing, not just for us but for a lot of the regions throughout Texas,” Chaudhry said. “We used ZipGrade for competitions throughout the whole year, but it could not handle the influx of thousands of students coming on to take tests at the same time. Schools weren’t able to open tests or had to log in late for no fault of their own; it was just that the system we were using didn’t accommodate everyone.”

Despite the host of technology problems at Regionals, the team won many individual distinctions there as well. Chaudhry won gold in Art, Literature, Science, and Interview, silver in Economics, and bronze in Music and Social Science; Yang won gold in Social Science and Speech, silver in Math, and bronze in Economics. Kim won gold in Interview and bronze in Speech, senior and Scholastic team member Stephanie Na won bronze in Interview, and senior and Varsity team member Julie Rojas won bronze in Speech. With their official season concluded, the team now plans to turn its focus to Academic UIL, where many of its students also compete, as well as planning and organizing for next year’s competition.

“Anytime I refer to AcaDec a lot of people just hear ‘Oh, this is just a club where you go and take tests,’” Chakraborty said. “On the surface it really does seem like that, but I can almost guarantee anyone who does AcaDec and is in the class will find some enjoyment. You sit down, do stuff at your own pace, and you have all your friends next to you. When test day comes, you sit down and take the test, but it’s not like you’re constantly taking tests over and over again.”

The team is hopeful that next year, more traditional in-person classes and competitions will resume. Chaudhry stressed the difficulty of this year, saying the team’s class periods and after school study sessions served not only as chances to further prepare and study, but to bring the whole team closer together.

“Building friendships makes the process a lot easier,” Chaudhry said. “When I joined the team, there were a lot of people who helped support me; they respected my hard work and I respected them as well, and it helped to dispel a lot of insecurities I had. As a senior, not being able to do that and help the sophomores and juniors as much as I would have liked to was upsetting. A lot of AcaDec is based on team bonding.”

While the team this year lost many of its group activities, from studying to partying and snacking, Chaudhry said she is still proud and pleased with what the team has accomplished.

“I’m especially grateful to all these teachers who have helped guide me throughout this whole time,” Chaudhry said. “I became more confident and a lot happier with the team. I have so much love in my heart for all the teachers and all the students. It was so comforting to be assured that every time I walked into that room, I would walk out with a smile on my face.”