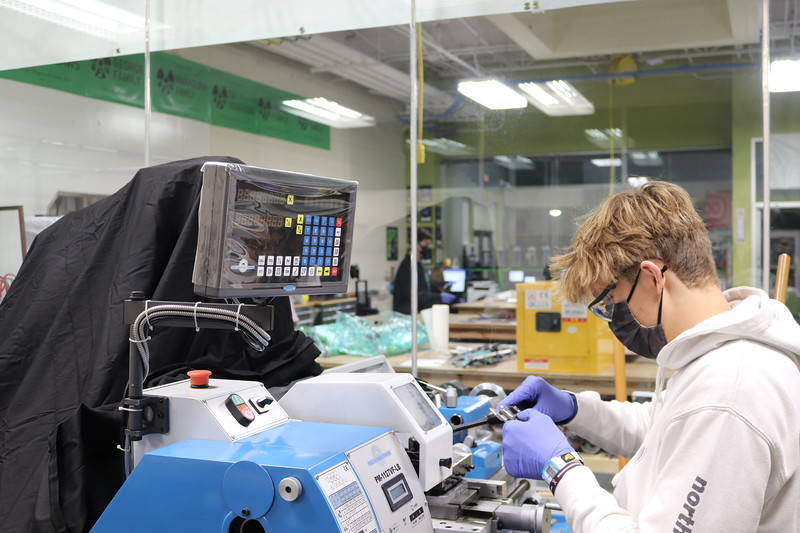 Josh Pack, senior and Vice President of Build for CRyptonite, measures a part before he cuts it on a lathe.

A subdued electronic hum runs courses through the air. Students are spread distanced around a table, assembling the frame of their robot. Outside their bay, on the playing field, motors whine as the programming team tests one of the wheel modules for the robot’s drive system. Several miles away, from homes all across town, students gather on Zoom to discuss how to write about their community outreach accomplishments. The whir of machinery is quieter than usual this year, yet as their first submission date approaches, everyone is focused on doing their part, bringing robots and awards essays together piece by piece.

The CRyptonite Robotics team is in their build season.

Build season begins in early January each year with the Kickoff event, when a new design challenge is revealed for the upcoming season. Due to COVID-19, all traditional in-person competitions for the year have been canceled. Instead, teams are tasked with a collection of new “at-home” challenges, challenging teams to make trickshots by shooting dodgeballs from their robot, drive through obstacle courses, develop their own ideas for robot challenges, and more.

“Every year they come out with a new game,” Emma Smith, senior and Vice President of Awards, said. “There’s a field, various goals, and limits on how we can build our robot. We have to prototype a lot and ultimately design something that can efficiently get through all those obstacles. Instead of doing that per usual, this year there’s a lot of online challenges we record for and submit.”

This year, the team has restructured their approach to build season to accommodate COVID-19 safety protocols. They only meet Monday, Tuesday, Thursday, and Saturday evenings at their build site to work on the robot, as opposed to their Monday through Saturday schedule from last year, and many groups within the team that focus on activities such as outreach and awards writing work entirely online.

“Instead of spending 40 hours at build every week I spend six,” Kyna McGill, senior and team president said. “Now when you’re attending build it’s all business. You really have to focus on just getting things done. We really have to focus on being as safe as possible and trying to get in as many new members as possible so they can still gain experience. The way we do our onboarding has to be a lot more efficient.”

In addition to limiting the number of sessions per week, the team has limited the number of students allowed to come in for each build session, and added health protocols such as wearing masks and gloves to their traditional safety rules.

“We keep track of who’s been coming and who hasn’t, and we’ll reach out to people asking them if they want to come to build,” Josh Pack, senior and Vice President of Build, said. “We want to make sure everyone has a chance to get in if they want to. I definitely have to communicate a lot better and spend more time organizing. I definitely miss having more people; whenever you pass a certain threshold of people it inspires confidence. When there’s more chaos people who might not feel as comfortable coming forward with ideas will feel more comfortable, and less like everyone is judging them.”

This year’s new at-home robot challenges include a searching challenge, where robots must be pre-programmed to find and pick up dodgeballs placed on the field, two obstacle courses, one in which the robot is driven by a student and one in which it must be pre-programmed to autonomously move throughout the obstacle course, and two shooting challenges, that test how quickly and accurately robots can fire dodgeballs into goals about eight feet off the ground.

“The biggest change is just time management,” Pack said. “Individually, each subsystem of the robot, like the intake to pick up balls and shooter to launch balls, only gets about two days a week. We have to make sure we do as much as we can at home and have a plan before we come in, organizing who comes in, when they come in, and what they are working on. I have to make sure that there’s communication across the subteams, so that the knowledge of what we did and learned one day carries over to other days.”

In addition to the robot challenges, the team also is working to complete awards submissions. Each year, the team must submit essays detailing their outreach and volunteering efforts with the community. This year, two new challenges have been added. The Innovation Challenge requires teams to identify a real-world problem they want to solve and create an idea for an invention that could solve this problem, and the Game Design Challenge requires teams to develop their own idea for a traditional robotics challenge.

“There’s opportunities for pretty much any interest in robotics, beyond just the robot,” Smith said. “My role is a lot of writing and trying to make the team look good. It’s not writing about robots or engineering like one might think, but rather our impact on the community and the outreach we do, as well as how we interact with sponsors and the business related elements of our team.”

Despite this year’s changes and the large amount of seniors on the team, students are hopeful that the team can continue to grow and develop further in the years to come.

“I’d love to see them work with the community and other clubs more,” McGill said. “Considering we are a 20 year old club, we can be doing so much more. I think we need to put an emphasis on giving back to the community. Beyond that, we continually streamline our learning process, so I think the way we onboard students will change, and the attitude surrounding robotics will change. A lot of people fear they aren’t smart enough to be in robotics, and while I can understand why they would think that, it’s simply not true. You can be in robotics no matter who you are or what you’re interested in. I would like to see people realize that there’s a lot more to robotics than just the robots.”