Soul: The Good, The Bad, and The Incredibly Ambitous [ MINOR SPOILERS ]

Pixar's newest movie does not disappoint. 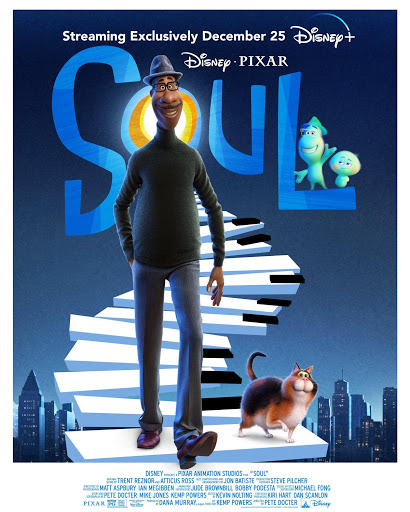 Pixar’s newest movie, “Soul”, was released on Disney+ December 25th 2020. For most movies, I usually have some kind of bias when going into it. But I had no particular feelings towards “Soul”. The trailers were too confusing and didn’t show enough of the plot for me to form an opinion about it. Despite this, I was excited to see what the movie had to offer.

In this movie, Joe Gardner is a middle school band teacher who would much rather be a piano player for a jazz band. He gets that chance when he is invited to play in Dorothea William’s band. But, Joe falls in a manhole and is sent to the Great Beyond, the stairway to the afterlife. He escapes and falls into the Great Before, a place where baby souls get their personalities and are sent to earth. He meets soul #22 there, a baby soul who can’t get sent to earth. Joe is tasked with being her mentor and sending her to earth.
The Good
The Great Before Vs. The Real World
In the Great Before, everything takes a look that can be compared to the 2015’s “Inside Out”. The souls that float around give off a soft glow, and the buildings have no straight instead opting for subtle curves. The color scheme is a lot of different shades of blues, with some purples mixed in. This gives the setting a dreamy feel, which greatly contrasts with the real world. There are all sorts of colors in New York City (where most of the movie takes place), and feels a lot more real. This contrast gives a lot for your eye to look at.
The “Antagonist”
In the Great Before, there are these beings called lost souls, souls who have let something that they enjoy take over their life. The antagonist, Terry, is not far off from this. Terry is an accountant and keeps check of how many people go in and out of the Great Beyond. When he sees that Joe had skipped dying, he goes on a determined escapade to try and catch him. Even though Terry has a cold demeanor, he isn’t a bad person because at the end of the day, he is just trying to do his job. This, plus the fact that the voice actor (Rachel House) does an excellent job of portraying the character, makes Terry a really good antagonist.
Use of Historical Figures
Many famous figures such as Mother Teresa, Muhammad Ali, Socrates, and more make an appearance in this movie. They all serve as 22’s mentor throughout the years, and constantly comment on how annoying 22 is and how she won’t listen. These mentors provide some good comic relief for the movie and actually have a profound effect on the story as a whole, making them an excellent addition to the movie.
The Bad
Unfinished Storylines
In “Soul”, Joe and 22 talk about a lot of things that never seemed to get resolved., For example, Joe’s girlfriend Lisa gets brought up a couple times, and it is hinted that they might get back together. In addition to this, they never expanded on the relationship between Joe and his dad. Both of these feel like missed opportunities that they could have used to make the movie even more interesting, but they are instead used for sequel bait (maybe).
The Ambitious (For Better or Worse)
The Subtle Message of the Story
A good moral in a movie is original, subtle, and without any contradictions to confuse the audience. “Soul” checks all three of the boxes when it comes to its message. It’s a moral that has never been done in a family movie, is so subtle I had to watch it twice to fully understand it, and doesn’t contradict itself throughout the entire movie. It was a nice treat to figure out what it was, and greatly improved the movie for me.
The Insignificance of the Antagonist
Terry doesn’t take a major role in the movie, and I feel like the “Soul” team could have handled it better. Whenever he comes back, it feels off and takes away the good pacing the movie had. If he had been an integral part of the movie, the pacing would have felt a lot more fluid.

“Soul” is one of the best movies of 2020. Even though the “goods” in this movie aren’t great enough for it to be Pixar’s best this movie is great nonetheless. The settings the movie uses, the comedic yet impactful historical figures, and the antagonist help lift this movie above many. Add this with the unique and thoughtful message “Soul” had, and this movie becomes a must-watch for all ages.
Rating
8/10

“Soul” is available on Disney+, a subscription service that costs 4.99 per month.