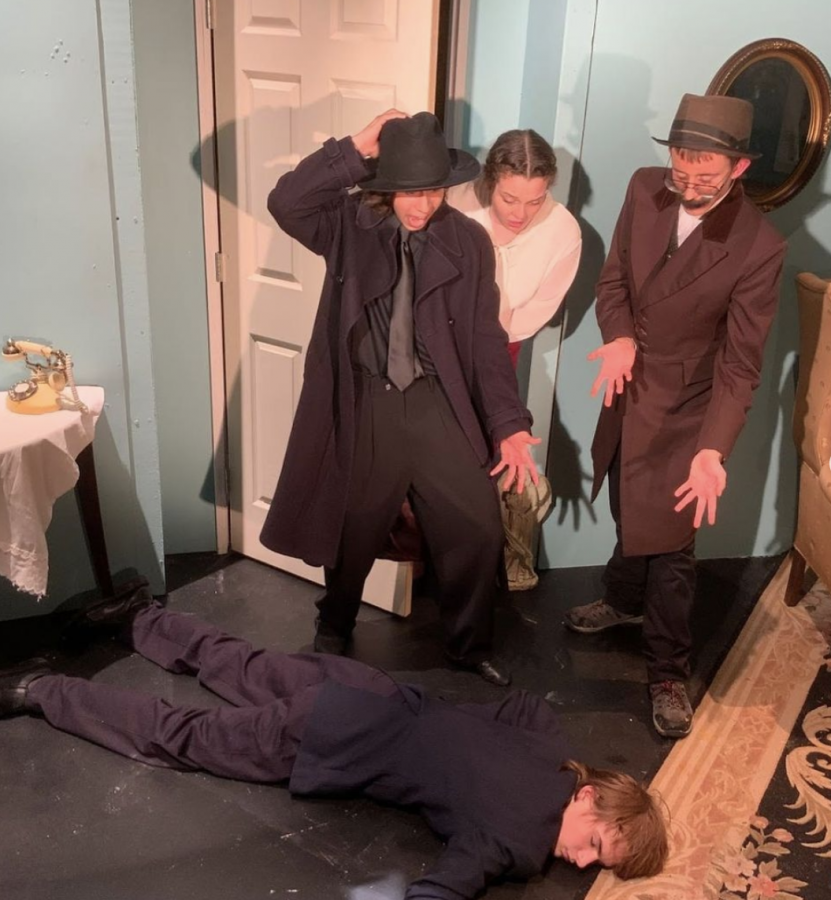 CRTC students act out a scene in the show to take pictures for the podcast.

Cinco Ranch Theatre Company (CRTC) productions usually draw 500 enthusiastic fans to the auditorium, but this year, fans tuned into the Halloween Podcast on their computers.

The CRTC Halloween Podcast was free to the public and featured Agatha Christie’s “The Case of the Careless Client” and Abbott and Costello’s “Who’s on First”.

“Our podcast was based off of 1940 radio dramas,” CRTC President Isabella Morrow said. “It was our directors’, Mr. Wile and Ms. Pritchet, idea. We were brainstorming what we could do, and we were thinking Zoom plays which is what we are doing now. We went through four or five shows in the beginning of the year before settling on what show we were gonna do.”

One of the major hurdles after choosing the show was getting the rights to the show, so the theatre could record it for the podcast.

“There were a lot of issues with getting the rights to only perform a show with audio,” Morrow said. “It’s really hard to get the rights to a show to be able to record it. And so we had to contact the publishers of each play, and get the right to the show because obviously, we can’t show it without the rights.”

The original plan was to buy the copyright for a live broadcast of a different play, but CRTC chose Agatha Christie’s “The Case of the Careless Client” and Abbott and Costello’s “Who’s on First”, because they could acquire the copyright to record the performance.

“As we saw how the school was handling COVID, we decided we wanted to be a little bit more cautious with it,” Morrow said. “So our directors decided to change it to the podcast.”

Changing it to a podcast meant there would be absolutely no audience interaction, not even Zoom applause.

“I know for my friends who act the difference between how they feel when they’re performing with an audience that’s super interactive: laughing or bullying or crying is so much easier than just that dead silence,” Morrow said. “I know that the audience is what drives them to want to do what they want to do.Having the audience watching them is what fuels their passion for theatre, so I feel not having that audience definitely makes it harder for people to perform.

CRTC borrowed microphones from Global Vine and took pictures to show during the podcast with an I-Pad. The editing was done on iMovie.

In addition to the show, CRTC created advertisements for a made up company called “Cinco Clean”.

“In your standard 1940 radio dramas, there’s little commercials that play throughout,” Morrow said. “So we had some of our actors actually write commercials to play in the middle of the podcast for 30 seconds.”

CRTC uploaded a trailer on social media that introduced the plot and characters of the play to spread the word about the podcast.

“[CRTC Historian] Victoria Gregg made a bunch of flyers and posters,” Rose said. “Then I posted them on Facebook, and the other officers posted them on Instagram and Twitter.”

The podcast was only available from October 29-31 because it was made for Halloween, and it could not be available indefinitely due to copyright laws.

“We paid for it to be up for three days,” Morrow said. “When it comes to theatre, the show is only available for so long, so we wanted it to be more like that.”

Afterwards, CRTC had to clean up to be ready for the next show which will be a commedia style improv which will replace Comedysportz performances they have done in the past. CRTC decided not to do Comedysportz this year because they could not make a profit on tickets.