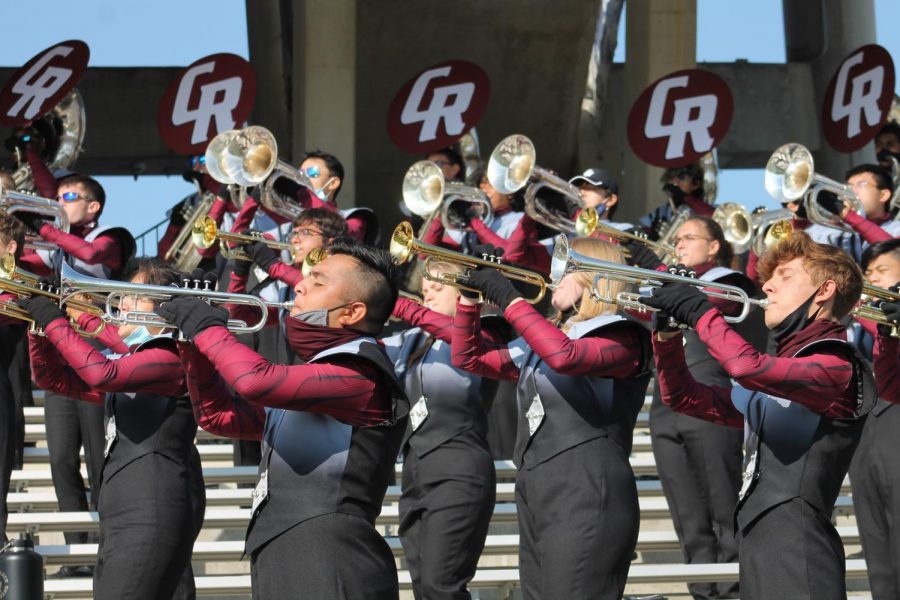 The theme of this year's CRHS marching band show is 'Nothing but Love'. Courtesy of https://www.flickr.com/photos/crhscougarband/with/50585626042/

The Cinco Ranch marching band has always considered itself a family. One of the largest extracurriculars on campus, it brings together members from all grade levels, classes, and musical backgrounds. The band has always prided itself on its members and their close friendships- so what happens when they’re required to stay six feet apart?

“Adapt,” senior Kevin Debord, a trombone player, said. “That’s all you can do.”

With the highly anticipated homecoming game performance just one day away and UIL competition season beginning next week, head director Ray Jones and student band leaders are ready with a new show and a new frame of mind.

“Our last competition wasn’t that different, other than that we had to stand in freezing cold while it was pouring rain,” Debord said. “I think that last competition will actually help our chances going into UIL, it was the worst case scenario, everything the directors probably dreaded. But it happened, and we came out just fine. That added preparation and extra chaos-outlet will probably help us advance far this year. Hopefully things go back to normal eventually.”

“Change happens every year,” Debord said. “Culture wise it has changed a lot, for better or for worse is not for me to decide. There is definitely more separation by section and we can’t do as much together. All the jokes, all the games- I miss that. It takes away from the intimacy of the program. Zoom and everything is helping to replace that separation, hopefully we’ll be able to come together in time for UIL. As a band, we can still keep it together and make it happen.”

Underclassmen have also had to adapt to the new COVID-19 restrictions. Unable to hold practices during the summer, new-comers to the marching band have had to learn quickly. In addition to daily two hour practices, student drill instructors have held after-school sessions to ensure all members are on the same page.

“Practices are long, but I get to hang out with my friends so I don’t mind so much,” sophomore Ben Hoover, a clarinet player, said. “I stay in band for the people, it’s really like a family. Everyone is kind and seems to know each other. In the beginning you really lost that, everyone was disconnected. But as the season’s gone on it’s felt more like a band. Our drill instructors have done a lot to help that. They’ve hosted safe parties and after-school rehearsals to help bond more.”

Although they have a busy two weeks ahead of them, band members are already looking forward to the UIL State competition in 2021.

“We’ve been practicing the show for a while now,” Hoover said. “We still have a lot of work to do, but if next week goes well we probably have a much better chance. One step at a time right?”

The theme of the 2020-21 show is titled ‘Nothing but Love’, something the members say everyone could use more of during this stressful year.

“Love is definitely how I would describe the show,” Hoover said. “The theme is kind of like a wedding, but overall it’s just really happy, or joyous. Part II looks amazing, I hope everyone can enjoy it. Maybe it will help them forget what’s going on for a minute. After all, that’s why we’re all still practicing.”