One Match at a Time 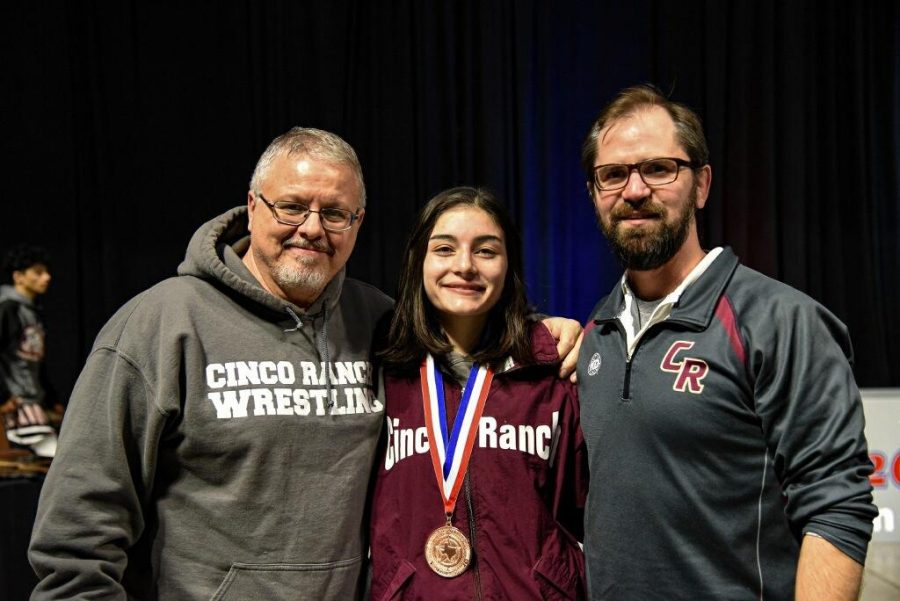 From all around athlete, to almost cougar star, to State wrestler, junior Isabella Walsh has done it all. After a successful third season on the Cinco wrestling team and a win at regionals, Walsh advanced to place fourth in State competition, Feb. 22.

“I was shocked when I found out I had placed,” Walsh said. “I was on a high. My coaches were hugging me and screaming ‘You just placed! You just placed no matter what happens!’ I was just so happy. It’s the happiest thing ever and you want to hug everyone around you.”

Athletics has always been a big part of Walsh’s life. She participated in volleyball, basketball, track, soccer, and even dance teams during junior high and outside of school, but wrestling has always been in her blood.

“My dad used to wrestle,” Walsh said. “I was actually in a dance class for around two years, because my mom wanted me to be a cougar star. And you’ve never seen me dance, but I have no sense of rhythm. At all. So after the first week of class I built up the courage and was like ‘Hey Mom, I don’t like dancing. I kind of want to try wrestling!’. She, of course, said no right way. But my Dad thought it was the best idea ever! For the longest time my mom was like ‘Absolutely not.’ but now she’s one of my biggest fans. They didn’t miss any tournaments this season. My Dad was really proud, and very loud.”

Walsh had made it to State competition before, going 1 to 2 with other Texas wrestlers last year. But as a junior, she was determined to earn a spot on the podium and get her picture on the wrestling team’s honor wall.

“For the match that would determine if I placed or not, I was against a girl that I had wrestled earlier in the season,” Walsh said. “But I had only beat her by one point, so it was kind of back and forth. I was super nervous going into it. And I tried not to be too nervous, but I didn’t want to be too cocky either. I just tried to balance everything and wrestle my match.”

Often struggling to hold onto her new weight class this year, Walsh remembered her early experiences in wrestling and why she loves the sport.

“I was really scared my first year,” Walsh said. “I thought I was gonna get beat up! I thought it was gonna be super scary and that there were just gonna be a bunch of boys there. Of course, there are a lot of boys there, but it’s not very scary, it’s just kinda fun. You just have to stick through it for a little bit. Don’t be scared to get hurt, and then you can beat up all the boys.”

While Walsh isn’t sure if she’ll be able to continue wrestling in college, she’s looking forward to several off-season tournaments after spring break and another successful season next year.

“It’s hard to explain,” Walsh said. “It’s not something you experience very often. You work so hard for something, and finally everything pays off and you reach your goal.”