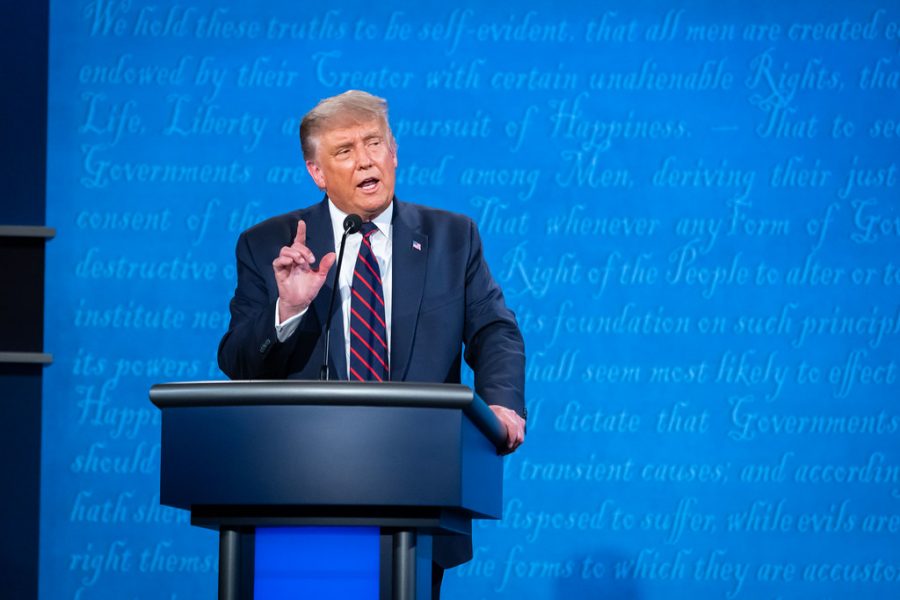 The first presidential debate of the 2020 election was held Tuesday, September 29, at Case Western Reserve University in Cleveland, Ohio.

The debate was broken up into several segments, each focusing on a specific topic, including the ongoing supreme court nomination fiasco, COVID-19 response, the economy, racial injustice, climate change, past political records, and election integrity. Within seconds of starting, the tone for the debate was set as Trump frequently interrupted Biden in increasingly outlandish ways. After four minutes, the president upped his verbal assaults by stacking a chain of megaphones from his mouth to his microphone; two minutes later, his antics became physical, as he pulled a squirtgun from his suit jacket and gleefully doused both Biden and debate moderator Chris Wallace.

“So far, we definitely have an exciting scene here,” Stu Dent, senior and County Line staff writer, said approximately 10 minutes into the debate as the president lobbed rotten eggs at Biden. “All our on-site pollsters agree that aggressively yelling while pelting everyone within a 12 foot radius with soggy trash is a bold, calculated strategy that just might help Trump win back the suburban women electorate. These types of maverick moves by the president really showcase just how powerful his political acumen is.”

Biden began hammering back after several minutes, saying that Trump’s actions were “so unpresidential” and that the president was a “clown.” At this point, Trump quickly donned oversized shoes and began literally clowning around, juggling campaign buttons, making balloon animals obnoxiously close to the mic, and even careening around onstage in a clown car, making what some commentators called “some really sick donuts” around Biden’s podium before nearly running over Wallace.

“The clown routine was another daring play by the president,” Dent said. “Trump thrives off the energy of his supporters and does well with audience feedback, and even the small debate audience clearly ate it up. The laughter was especially audible from Trump’s entourage thanks to their lack of masks. Sure, they might have broken the official rules established by their debate hosts, but they’ve done the same thing before with official CDC guidelines, like at the Rose Garden Event where the president formally announced Amy Coney Barrett as his supreme court nominee. It just makes sense for them to maintain continuity, and frankly, I see absolutely zero chance that these actions come back to haunt them in a few days.”

The chaos of the debate quickly reached a fever pitch, with Trump bragging about how he “brought back Big Ten football” before taking out a football from within his podium and unsuccessfully trying to hit his rival with it. Biden later called Trump “the worst president America has ever had,” to which Trump responded “I know you are, but what am I?” followed with a hearty giggle.

“Trump and Biden both hit some new highs and some new lows,” sophomore Debby Bates said. “Biden rightfully hit him hard on his coronavirus response, but he stumbled a bit for me when he falsely said that manufacturing was struggling even before the pandemic hit. I didn’t like Trump’s responses to claims he had mismanaged the pandemic either, but he was just so energetic and bombastic. Let me tell you, when he bullied Biden’s son for past substance abuse problems, I felt proud to be an American.”

One of the biggest bombshell moments of the night came when Wallace asked Trump if he would “condemn white supremacists and militia groups;” when specifically pressed to denounce the far-right group the Proud Boys, the president instead told them to “stand back and stand by,” before pivoting to claim violence was caused by “antifa and the left,” after which he vowed to never again use his left hand as a show of solidarity against what he called “the radical left.”

“I just think both of them could have been kinder,” junior Hugh Mann said. “Whatever happened to common courtesy? Joe Biden could have said, ‘Will you please shut up man,’ President Trump could have said ‘Proud Boys, please stand back and stand by.’ After all, ‘condemn’ is an awfully strong verb. He could have ‘given them a stern talking-to,’ or a ‘strongly worded scolding.’ Don’t they have any manners? They both seemed equally terrible to me.”