Review: Dodie at House of Blues

Musician Leaves Lasting Impression on Fans Through Her Music 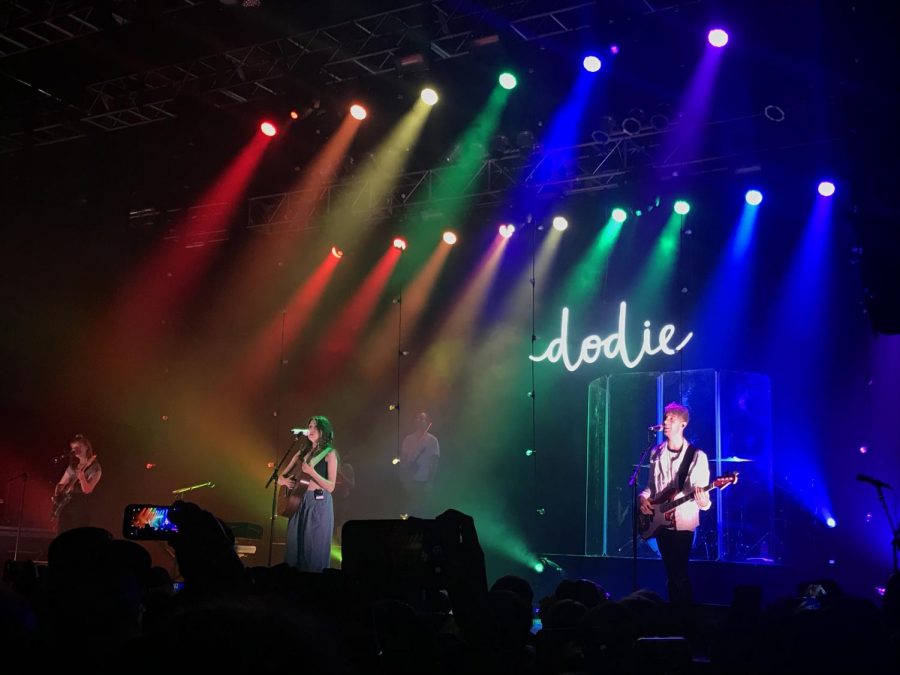 Dodie Clark uses her tour as a space of acceptance and positivity.

Leaving the House of Blues on the night of September 23, I felt nothing but a sense of awe. A light and calm atmosphere lingered in the air after Dodie, a British singer-songwriter, performed in Texas for the first time.

The show started off with the opening act, Adam Melchor, playing a relatively quick set, yet somehow managing to forge a new love inside of me for his music. His awkward-yet-composed stage presence combined with the beautiful lyrics of his songs was enough to make me traverse through the crowd to the merch table to pick up his CD. Relying solely on a keyboard and a guitar to make his music, every song was light and crystal clear, allowing listeners to focus in on the lyrics. Every song he sang struck a chord with me on a different level. He was the perfect opening act to precede Dodie’s performance.

When Dodie herself came on stage, the venue was nothing but dark as a spotlight cast somewhat of a heavenly light down upon her. As the lights slowly brightened, a beautiful stage set up was revealed, complete with hanging lights, bright colored spotlights, and a giant light up sign reading “Dodie” in beautiful calligraphy styled letters. The concert started relatively fast paced, but slowed down towards the middle as Dodie transitioned to her keyboard. This section really allowed the other players in her band to shine through, such as the violin and cello player who artfully accompanied her performance throughout the entirety of the show.

Then, it picked back up with Dodie playing older tracks as opposed to new ones off of her latest album, “Human”, which the tour was intended to promote. By the end of the show, when songs ended, in the few seconds of silence between, hysterical crying could be heard from parts of the audience as fans listened to Dodie’s songs. Dodie’s level of audience interaction transcended anything I have ever seen from artists I have seen in the past. From stopping the show to sing a fan happy birthday, to giving the audience an excited “Yee Haw,” Dodie never failed to talk with her fans before and after songs. She also never failed to go in depth about the meaning of a song before performing it. By retelling stories from her younger years, every song was presented with a meaning behind it whether it described dealing with sexuality or anxiety and depression.

Dodie’s concert is one I will never be able to forget. It presented such a positive and loving atmosphere that was able to draw every listener in, as can be exhibited through the older man behind me, who shouted “You’re pretty good,” in the transition period between songs. The show truly did bring all attendees together through the music and through Dodie’s stage presence. It was a beautiful night spreading an even more beautiful message of positivity.