The Art of Being You: Zoe Heuser 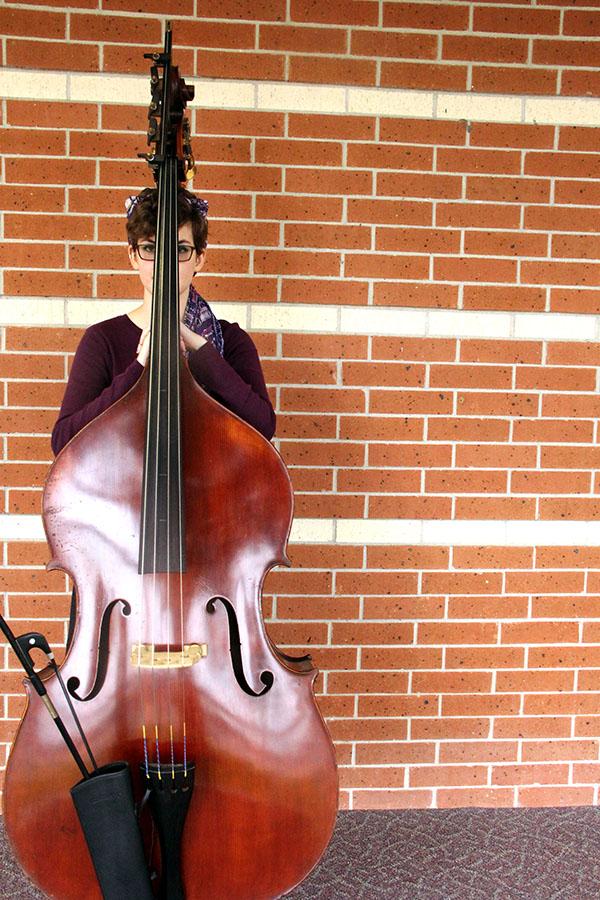 The Art of Being You highlights a random individual’s gifts and talents.  Each blog tells the story behind an individual’s life and appreciates them as a valued masterpiece.

Her arms take hold of the wooden frame that hovers over her body. Her mind goes elsewhere, beyond reality, blending the sounds that both vibrate out of the thick strings and echoe out of the inner craft of the bass. In these moments the boundary between life as it is and a life full of possibilities disappears and left in it’s place are pages riddled with sharps and flats.

The descending legato shifts her posture to release an abrupt fortissimo. Whether it was music class game in fourth grade or destiny that decided her fate is not clear, but senior and bassist Zoe Heuser could not imagine it any other way.

“It just seemed natural,” Heuser said. “I kind of knew I wanted to play bass when I was in fourth grade. [My class] was playing a musical bingo game so that when you heard an instrument’s sound, you had to put a little chip on the name of the instrument. When I heard the sound of the bass, I really liked it. So I kind of waited till sixth grade and then I started first year orchestra.”

Since day one in the sixth grade beginners’ orchestra, Heuser has been committed to music and her bass. Half way through seventh grade and in her second year of orchestra, Heuser made Region Orchestra and also joined the Houston Youth Symphony String Orchestra.

“I realized that it was the kind of the thing I wanted to keep doing for the rest of my life,” Heuser said. “I wanted to do more, and I joined [the Houston Youth Symphony] with another bass player and  just kind of moved up from there. Now this is my third year in the top orchestra, and it has become a fixture in my life. Rehearsal is all of Sunday afternoon, so I’ve got to love it if I am giving up my weekend. Since I enjoyed playing in orchestra so much, it is easy for me to give up my weekends for things.”

As she devoted and immersed herself in music, Heuser began playing higher level pieces and moved up to the top orchestra, Symphony, her freshman year. This past year, Giovanni Bottesini’s composition Elegy proved to be Heuser’s pivotal, maturing piece.

“I had a lot of trouble with the piece because I had switched to a new teacher, and I was in that phase where I was trying to transition from beginning, okay player, who does pretty well, to gearing up to be a major in music for college,” Heuser said. “So it was a really rough time period. I had to get used to my new teacher and a different mind set and whole new set of skills.”

Giving up the majority of her weekend, playing in various orchestras and taking on higher level music was just the start of Heuser’s journey to fill her desire and passion to play. Heuser plans to build her career through music and become a professional bassist.

“My goal really is to perform, but I feel a lot of pressure sometimes to learn something else, like how to teach music, so that I can have that quote-unquote backup job,” Heuser said.

According to Heuser, her parents are supportive of her goals but also urge her to have a backup plan of music management or business relating to music, but Heuser is dedicated to her love for performing.

“I keep doing music,” Heuser said. “That is the most straightforward way to say it. Music has always been consistent for me. I can’t really imagine choosing a different path. ”

For Heuser, playing as a professional is more than music, more than emotion, more than talent: it is a contribution to the world.

“Arts are of a part of human existence,” Heuser said. “They have been, and will be. Even if I am not pioneering new medicines, I am still making human life more human by what I do.”

Additionally, what has kept her passionate towards music is the challenge and excitement it brings to her world.

“[I play] for the awesome moments and even the struggles, because if there weren’t any struggles to overcome, learning a piece wouldn’t be so worth it and would just become going through the motions,” Heuser said. “I am not a very outwardly emotional person. Most of the time I tend to put out the same content face. But a lot of the time, when playing music – and not specifically one event where I just feel like I’m really feeling something  – but every time I perform or rehearse or even practice, playing music lets a little bit of what I keep inside, out.”

After attending Interlochen Arts Camp this past summer in Michigan, Heuser inwardly solidified her career choice. She dreams of performing challenging music in a traveling ensemble.

“Being immersed in music and people who love other arts was probably my favorite part. It was pretty all inspiring. These experiences are my sustenance – it’s how I live,” Heuser said.